Another fairly simple and important motorcycle maintenance task is to change your battery every few years. A motorcycle battery is rather small compared to a car battery and does not hold as much of a charge as a car or marine battery.

Also in general motorcycles are not used as often as the average car so a motorcycle battery is more susceptible to voltage loss from simply not being recharged on a daily basis. 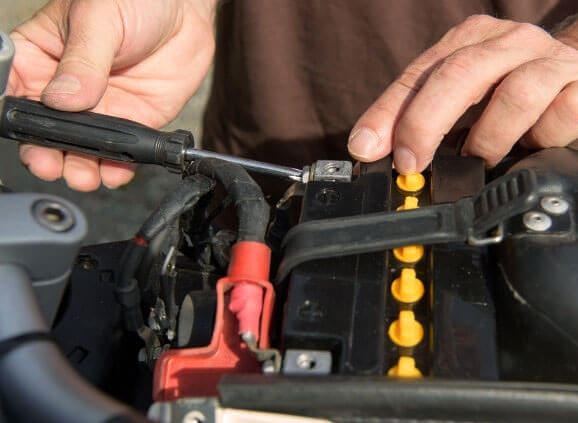 What happens over time is when a battery stays in a discharged state for too long it will no longer be able to be charged to its maximum voltage. This is often the case with motorcycle batteries. It is also important to change your battery every few years for the simple reason of not getting stuck on the road far away from any service station. Some modern street bikes may have a reset switch when re-installing a battery, be certain to check with your owners manual if you suspect this is the case.

You will not need many tools to change your Motorcycles Battery. The following tools are the most commonly used to change its battery.

The best place to perform this task is either outside or in a well-ventilated garage. There is always a slight change of battery acid spillage and you should not try to attempt this process in a small refined space. Battery acid can burn your skin and/or cause blindness so be very careful when handling the battery. Do not tip it or lay it on its side. Place an old piece of cardboard near your work area to place the old/new battery while working near your motorcycle. Also, be certain to place your motorcycle on its center-stand or firmly secure it so it does not fall while you are working on it. Ensure that the motorcycle is turned off and the kill switch is in the off position.

How to Remove Your Old Motorcycle Battery

The first step to remove your old motorcycle battery is to remove the side cover from your motorcycle. On most V-Twin bikes the battery is located under the seat and can be accessed by removing the side panel. It is always a good idea to take a picture with a smartphone or camera after you remove the side panel as this may be helpful later on when re-installing the new battery.

How to Install Your New Motorcycle Battery

Before attempting to connect the terminal wires mount or partially mount the battery in the motorcycle securely such that it will not fall out while reconnecting the battery terminals. Once each terminal is connected be sure to re-install the mounting bracket to ensure that the battery will not slide or move while riding. You can now safely test your new battery by turning the key on and ensuring that the headlight and other electronics illuminate.